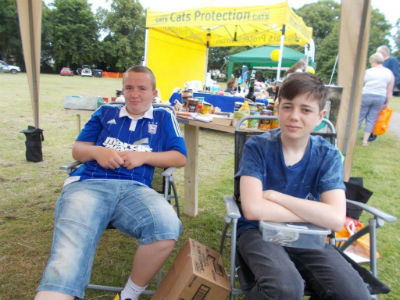 Once again, The Branch took to the field in an effort to raise more money to keep the home coaches going. Sadly, once again, it was the same people who were there to help us – in fact we had two people who do not even go on the coach, helping. The people who came to help included the usual, dependable Derek – he is always there – Jim Lawrence, his wife and daughter, Richard Phillips and Bradley, Richard and Peter Brown, with other members of the family turning up at various times to add their support, and thank goodness for the junior committee, Kieron, Reece, Ewan and Jack who were all on duty  – a great effort by everyone.
No body gave out instructions, but one half of the group went round with the wheelbarrow, whilst the other half manned the tombola stall: once the wheel barrow group had completed a round, they swapped with the tombola group, who then did another round. In total, we managed to keep this going for four laps of the rec.
It was a very hot day, but in the end the effort paid off, with over £300 coming in from the barrow, and over £100 from the tombola. The total was £44 up on last year – a great effort by all concerned. It makes you think what the total could have been with a little more help. Having said that, well done to all those who did help, not just a morning, but from 7:300 a.m. to 4:00 p.m. Lets hope next year a few more who travel on the bus or who act as committee members help out.
The winner of the wheelbarrow full of goodies was Nigel Calloway of Chaplin’s Close, who had his ticket drawn out by Nick Keeble. It is pleasing to report that that the winner was very impressed with what he had won.

The photos show the willing band of helpers. 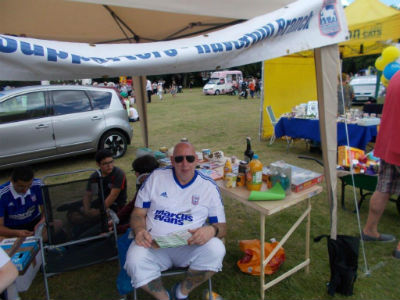 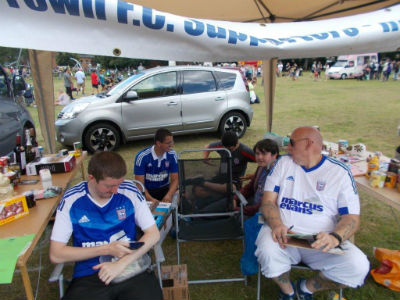