Haverhill Branch were asked to nominate up to three Junior Members to act as Flag Bearers at the above game on Tuesday and from a draw made in London the name of Jack Berry came out to represent our Branch.
Instructions were to be at the ground by 4.00pm for a 6.00pm kick off. They were taken into the players lounge for a get together and to meet other people on the same mission. Having had a chat they were then practised on what to do with the flag when taking it into the stadium. They were also given a tour of the dressing rooms before going back to the players lounge to have their packed lunches and goodies bag, After this they got changed into their track suits and other kit in the toilets and then made their way down to the pitch. Three flags were taken in, the English one, the Lithuanian and UEFA one and Jack was one of four whose job it was to carry out the UEFA one.
After the National Anthems had been played the flag carriers made their way of the pitch and returned to the stands to meet up with their parents etc.

In all it was a never to be forgotten experience for the youngsters and one they will always be able to recount. Sadly although understandably they were not allowed to speak to players or ask for autographs prior to game. 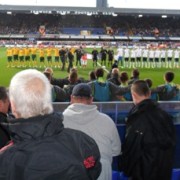