The day for our hunt arrived dry, a bit fresh and a little cloudy. We had arranged to start selling tickets at 12:30 instead of 1:00 in the hope of reducing some of the last minute pressure.
Those helping were present at 11.15 to open up the venue, set up the canteen, start cooking the bacon etc. while outside all the tables were put in place, blocks put out ( 600 grey, 7 green and 1 gold), and after a quick drink we were ready to go along with two bunnies who had been called from their burrows ready to great the kids.
During the first half hour we were thinking this is going to be a bit of a let down, because it was so quiet – but no need to worry. As time went on, the car park got busier and the tables started to get crowded until it was just a mass of people. It was lucky that we had dealt with some earlier. In the end it was one large effort to get them all through on time, and already the kitchen was selling fast.
It was arranged for the under 6s to start early before the mass at 2.00 p.m, with the rest to start at 2:02, to give them a chance. However, once the little ones were on their way, it was just one mad dash for the rest to take to their heels. With over 600 people hunting it was not good for the younger ones, although we only received three complaints. This was three too many and brought a decision for a change next year, before we had even closed up for the day.
The final count saw things increase on last years in all sections. There was a great raffle run by Nick and Val, which included 40 trader donations , and this was up 300%, while admissions and the canteen flourished – we had set out prices to be well below shop prices, and this went down well.
A new arrangement will be put into place for the next hunt which will be good for the under 6s, and will not be on any use to older ones, who will not be able to make use  it, although they will still be able to find their own eggs.
Thanks to a very kind gesture from Peter Upton, we were able to supply all non-finders (not many) with little bags of mini eggs, which kept them happy.

The Easter Bunny put in an appearance. 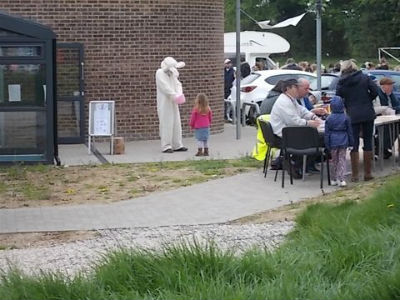 The raffle table was very impressive. 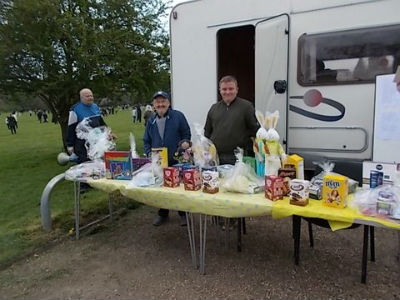 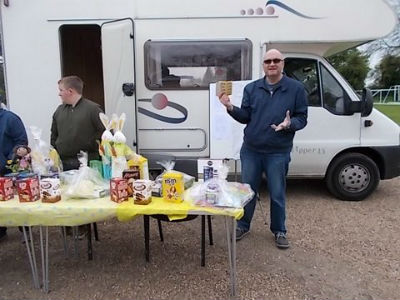 The search for the blocks. 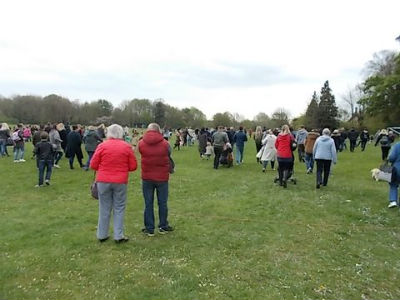 The winners of the  gold egg. 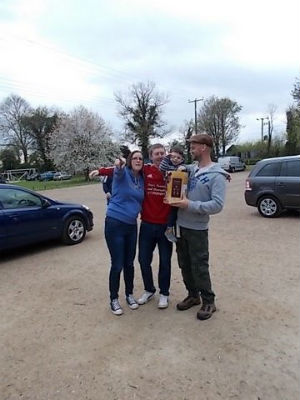