To all of you who helped out on what was not a very pleasant day, my sincere thanks. Please forgive me if I put the strangers first, but we had such a lot of help from people new to our cause. Firstly, Elizabeth and her four children. Between then, they (three including Mum) dressed up as bunnies, a feature I know the kids enjoy. Also the son helped on a stall. Then we had Bill Summers from KCA, who did the kitchen, making a lot of coffee, drinks etc. and clearing up. Then there was Pat and her friend, who cooked (and ate) the bacon rolls. Lastly, there was Mark from ITFC SUPPORTERS, who helped in various ways. It was great to see you all. Then we had our own members. I hate listing these in case I miss someone out. Looking after the car  park was head parker, Jim Lawrence, assisted by David Grimster and Reece. On the two ticket tables were head doorman Derek, with David Mills, Richard Phillips and Euan McGinley. Draw tables and games were looked after by Stuart Isaacs, Kieron, Jack, Pat, Bradley and Richard Smith.

The day itself was not a bright one. It started off cloudy, cold and damp, but , pleased to say, dry. However, by half past on there were only three cars in the car park, but this soon changed as parking spaces quickly  became filled up.

The start time of 2 P.m. had to be delayed, as people were still coming in. At 2.10 p.m., I called out on your marks, get set, but never got to go,. I got knocked over in the rush. Once I had got up and brushed myself down, I was amazed how full the meadow looked.

The collecting of eggs was a fairly quick process. It was not long and people were back at the tables with their catch to collect their prizes. We had 672 cream eggs and over 1500 mini eggs all packed into change bags in units of ten. These were for children who failed to find an egg. Pleased to say, not many of these came along.

This was a problem area – long lines of tables dealing with handing out eggs, and we will need to address this issue before next year. Then the heavens opened, and everyone got a soaking, but eventually everyone went home happy, but wet.

The other problem was the giving out of prizes, which was very time consuming. One idea would be to number all the prizes 1 to 50 with cloakroom tickets – tickets put in a box – then the winner comes up and takes a ticket from the box. What he draws is what he gets. This matter will be discussed at the end of Egg Hunt Meeting, along with the handing out of the eggs. 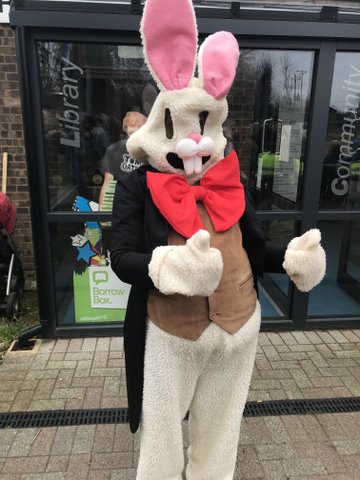 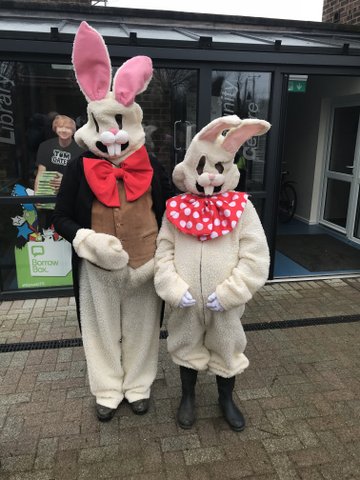 The whole event raised about £800.00 to help The Branch to continue to run coaches to all Ipswich Town home games.

Thanks again to everyone