Saturday the 3rd of December saw The Branch set off from Haverhill with 29 Ipswich Supporters on board, on a trial basis to see how viable it was for The Branch to run  coaches to  away Championship games. There were supporters from Stowmarket, Bury and Haverhill on the coach.
We managed to get a few extra people, but sadly the end product we were treated to was not good, as the performance of the team failed to live up to expectations. The game itself was a reflection of my camera – it gave up after the first picture, with the power house running out of juice. It was a shame, but for some reason the Ipswich players were reluctant to take it on themselves to take the responsibility to take shots at goal, instead seeming to be quite happy to pass the ball around. It seemed they were well down on confidence. It must be pointed out that we know we have some good players, but I think that they must have stayed at home on Saturday.
Having supported Ipswich, and only Ipswich, for over 70 years, I know from experience that all teams go through bad patches. Remember we have a good history, but we really need to get back to form. It is up to the management to show their skill in man management  to get this to happen. All players react differently – some need encouragement, some you can shout at. We could and can blend into a good team, but, at the same time, we, as supporters, need to be patient and to encourage the team – very difficult at this time, but necessary.
Other that the performance of the team, the trip was successful. The newcomers blended in well, and we hope that we made them feel welcome. As we passed Windsor, we noted that The Queen was in residence, but when it was suggested that we stop in for tea, our driver, Joe, said this would make us late for the game.
When we reached the outskirts of Bristol, we found that one of those travelling with us as in fact a Bristol City supporter. He jumped into the courier’s seat, and was able to navigate Joe through the streets of Bristol to help us reach the ground in plenty of time. His help was very much appreciated, and we are glad to say that he did not rub the result in – had he done so he might have had to show his skills in hitch hiking.
It was interesting to see The Clifton Suspension Bridge, and to learn that Father Christmas does not do as much work as we all think. Dreams were shattered: there were about 800 Father Christmases on scooters (not sledges) going around Bristol, a never ending stream of them, with a lot of puzzled kids standing on the pavement waving to them.
Thanks to all those who came with us, and on behalf of The Branch, we hope you enjoyed  your experience, and that perhaps we will see you again in the future.

Supporters on the coach to Bristol: 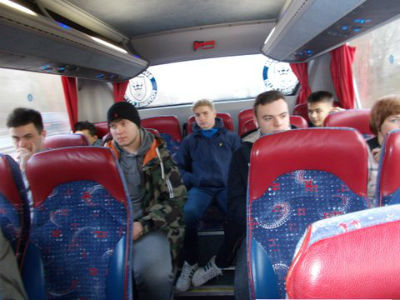