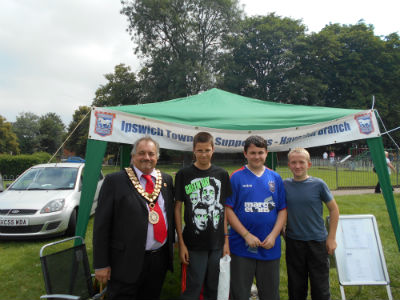 Arranged at very short notice due to illness and computer break down, nine members of the Branch turned up at the Haverhill rec on Sunday morning, five committee members and four of the younger members. 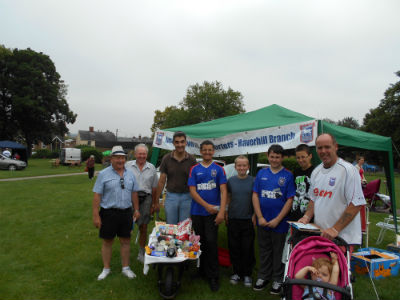 The day started well when it was discovered that the gazebo we had been given had the frame but no canvas, but Derek came to the rescue and went home and got his – which with the heat, was a life-saver.
The four younger members ran the tombola stall, two of them at a time, and with over 80 prizes on the table we only had four left at the end of the day. 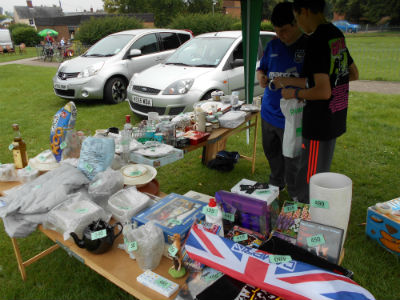 The older members, plus two of the youngster made several trips round the rec. with a wheelbarrow full of groceries selling raffle tickets – winner takes all . The winner was Michael Richards of Chapel Farm Cottage, Little Wratting. 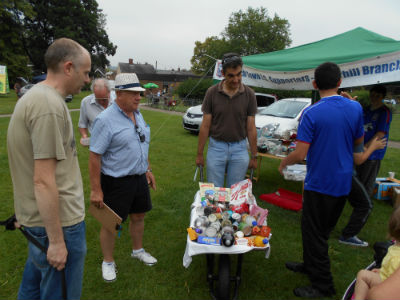 The mayor drew the winning ticket and dropped by to say hello.

This was a great effort by everyone, considering they spent eight hours in the sun (which is why they appreciated Derek’s gazebo when on a break, as it was extremely hot). Keeping everyone going with coffees, teas, cold drinks, ice lollies etc. was a full time job, but was money well spent.

On behalf of The Branch our sincere thanks go to Derek, Stuart, Jim, Steve, Kieron, Connor, Jack and  Reece , plus Iain who co-ordinated the whole event. THANK YOU ALL!